Phillips 66 has submitted a proposal to build a rail terminal at the Santa Maria Refinery that would bring oil trains to this area. We are concerned about the eleven (11) significant and unavoidable (Class 1) environmental impacts identified in the revised draft environmental impact report.  In particular, we object to the project due to:

ECOSLO has set up docent-led hikes on Stenner Creek and Bishop Peak open space trails, and many other locations, which are within the evacuation zone of the railway.  Likewise, ECOSLO is very involved in collecting material from the 2011 Tsunami and other waste along the coastal beaches.  Many of these are near the railway.  The potential devastation of an oil spill or explosion near the nature that we work to keep as pristine as possible is unimaginable.

In October of 2016, the San Luis Obispo County Planning Commission voted 3-2 to deny the proposed Phillips 66 rail spur project. This rail line extension would bring approximately seven million gallons of crude oil through San Luis Obispo County each week. Phillips 66 then appealed the decision to deny the extension. The Board of Supervisors hearings are expected to begin at 9 AM on Monday, March 13th and run all week. The SLO Crossroads March and Rally will begin at 12 PM on the 13th. We are calling on the Board of Supervisors to uphold the denial of the rail spur extension. Volunteers are needed for the hearing! We need people to phone bank the week before the hearing, greet and sign in participants at the event, marshal for the rally/march, and support Protect SLO with with other logistical and administrative tasks.

Tonight a community meeting was held meeting in order to discuss the hearing on May 16, 2016 regarding Phillips 66’s oil-by-rail project proposal.  The concerned citizens and local advocacy groups were joined by Eric Meyer, (the Planning Commissioner representing Supervisorial District 3) who was one of two commissions in a 3-2 motion to deny this project.  In the face of large opposition to this project, the Planning Commission’s majority has decided to continue hearing this proposal.  Although the Planning Commission Staff Report urges for a denial of this project, the Staff has now been instructed to find Overriding Considerations that would allow the project to be approved – with constraints.

How can I help?

More info can be found here:

Volunteer your time to make our community presence known. We want to protect SLO and stop this project in in tracks!  Wear a Stop Oil Trains t-shirt and/or hold a Stop Oil Trains sign during the next Planning Commission Hearing on Monday, May 16th, to ensure that the Planning Commission see our continued, local presence against this project. Local environmental groups will be in the lobby to check you in and give you materials (shirts, signs, etc.) as needed. Keep in mind public comment has been closed, but our presence is continually needed. You can RSVP to the join us at the public hearing through Facebook.

This hearing is being continued from previous public hearings, which took place on 2/4, 2/5, 2/25, and 3/11, and 4/15/2016.  The Planning Commission has heard from experts, public officials, and hundreds of concerned citizens and has even received a recommendation for denial of the project from the Planning Commission staff.

The San Luis Obispo County Planning Commission has agreed to extend the period of public comment.  This means that if you have not yet made your opinion heard, that there is still time.  It is likely that the Planning Commission will hear from the applicant during this session in order to clarify some points that have been brought up during the hearing. RSVP to the SLO Planning Commission Public Hearings on the proposed Phillips 66 Oil Train Terminal Project on Thursday, February 25th.

RSVP to the SLO Planning Commission Public Hearings on the proposed Phillips 66 Oil Train Terminal Project on Thursday & Friday, February 4th and 5th
This is an opportunity for the general public to offer feedback and testimony to the commission.  We are asking that all persons who are opposed to the crude oil trains to please come and make a brief, simple statement to the commission on what your major concerns are.  Sign-ups to speak will begin at 8 a.m. on February 4th and you can sign up anytime during the day to be placed on the list. It is very important that we have a LARGE turnout of speakers in opposition! RSVP here.

Where: Board of Supervisors Chambers at County Government Center, 1055 Monterrey St. in downtown SLO

Rally @ Noon on Thursday, February 4th
At noon on February 4th we will have a major protest rally against the Phillips 66 project across the street from the hearings. We need a HUGE turnout for this rally so please come downtown and spend your lunch hour with us!

Volunteer
With hundreds of SLO residents and allies from across the state expected to converge in SLO for the Planning Commission hearings next week, we need volunteers to help sign in participants, staff the materials table, marshall for the rally at noon on February 4, and fill in other logistical needs that arise.

Fill out the form above and please plan to arrive on time for your shift – we will be orienting volunteers during the first half hour of each shift.

1/25/2016 — Extraordinary news! SLO County Planning Dept. Staff Report recommends denial. Ahead of critical county Planning Commission hearings on the project, the SLO County Planning Department released their staff report recommending denial of the project. This document is pretty unprecedented from municipal or county planning staff, who in most cases serve as conduits for industry and placaters of public concern. This document reflects a bold assertion of principles of public health, safety, and climate protection over corporate profit.

The Planning Department’s recommendations do not come out of nowhere. Over the past two years grassroots activists in SLO and beyond have catalyzed a powerful campaign that’s engaged thousands of Californians and enrolled dozens upon dozens of cities, counties, school boards, unions, and campuses to pressure SLO County to deny this project. This recommendation is an affirmation of our collective power!

12/22/2015 — The Phillips 66 Final EIR is now available for review on the SLO County website. The project notification confirms that public hearings on the project will take place February 4 and 5, starting at 9am at the County Board of Supervisors Chambers. 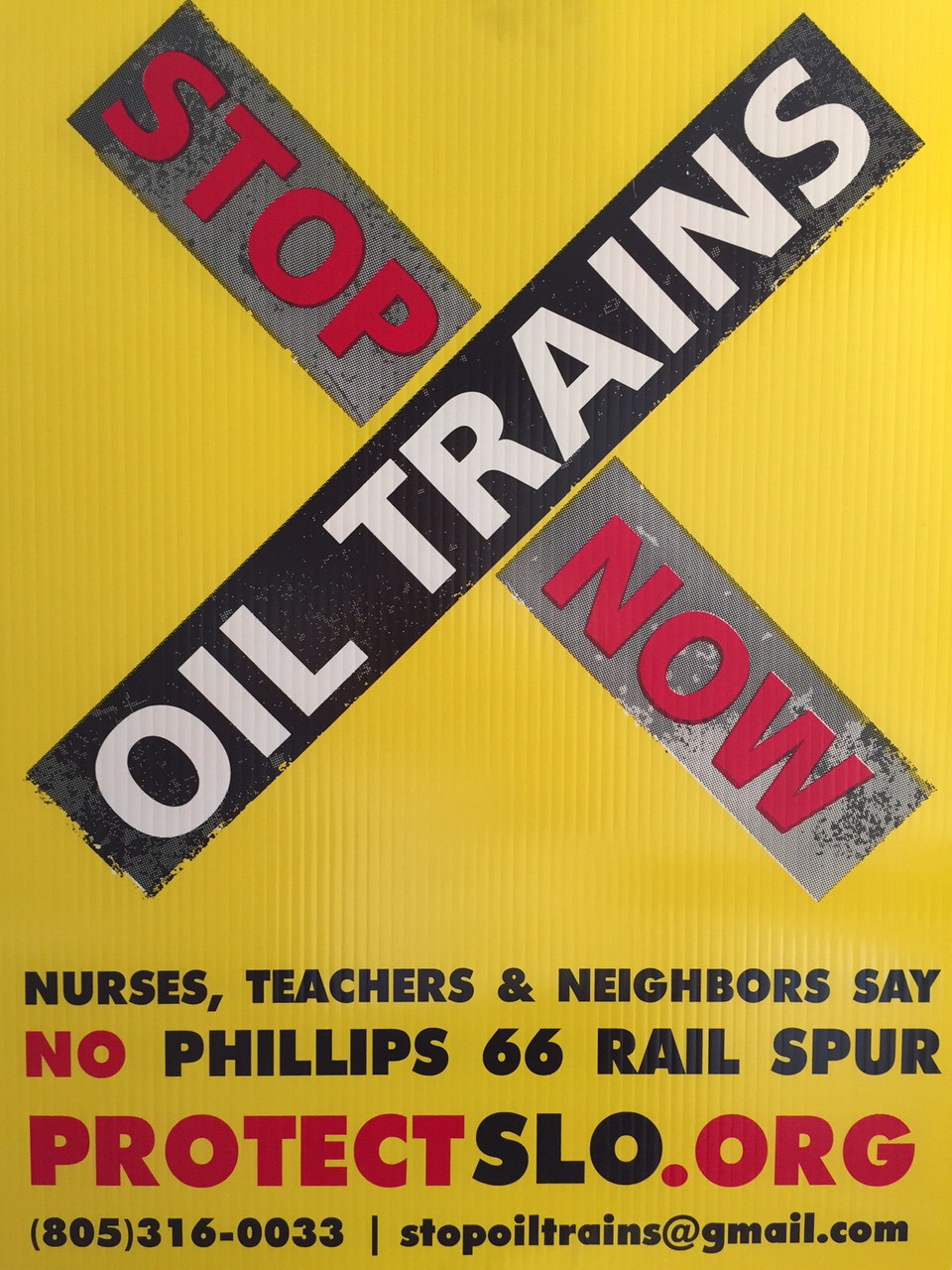