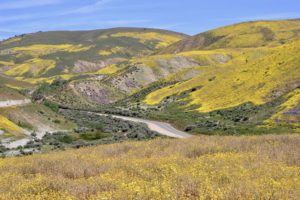 Carrizo Plain is one of five national monuments in California to be opened up to new drilling, mining and timber harvesting. Carsten Frauenheim | Mustang News

After just nine weeks and thousands of clocked volunteer hours, the Coalition to Protect San Luis Obispo County marched 20,000 signatures into the County of San Luis Obispo Clerk-Recorder’s Office for validation. Cheek-splitting smiles plastered the faces of volunteers. Their work had all but guaranteed a seat on November’s election ballot for an initiative to permanently ban new oil and gas drilling in San Luis Obispo County.

“I have grandchildren. I know that I don’t have the power to leave the Earth in a better state than it was when I was born into it,” the coalition’s co-founder Charles Varni said. “There [have] been so many tough things happening on the Earth as a result of burning fossil fuels.”

Coalition to Protect SLO County is punching back against efforts to expand new oil and gas drilling on the Central Coast. The “Protect Our Water, Air, and Land: Ban Fracking and Oil Expansion in SLO County Initiative” formed after the owner of Arroyo Grande Oil Field announced plans for new development. If passed into law by majority vote in the upcoming election, new oil extraction would be prohibited in the unincorporated lands of San Luis Obispo. This indefinitely removes rural areas such as Nipomo, Oceano, Los Osos, Templeton and Santa Margarita from new oil and gas well drilling or fracking. It would also derail the planned expansion of Arroyo Grande Oil Field.

“It’s a pretty high bar you have to pass to get a citizens’ initiative on the ballot,” Varni said. “We weren’t sure. We just entered into this. It was a leap of faith.”

Nestled in the rolling hills of Price Canyon, Arroyo Grande Oil Field has been active for more than a century. The field produces about 1,500 barrels of oil per day, which is piped to the Phillips 66 refinery on the Nipomo Mesa. New development would drill 481 new oil wells and increase the field’s range from 249 acres to 807 acres resting above the Arroyo Grande aquifer.

“The oil company says that the aquifer is in an isolated bowl, but their evidence is inconclusive,” senior attorney at the Center for Biological Diversity Maya Golden-Krasner said. “Neighbors have complained about contamination of their water.”

Freeport-McMoRan, the past owner of Arroyo Grande Oil Field, filed an aquifer exemption from the state and federal government in 2015. California’s Division of Oil, Gas and Geothermal Resources has approved this request but the Environmental Protections Agency (EPA) has yet to finalize the decision. Coalition to Protect SLO County’s initiative could become law before the EPA announces their verdict.

The purpose of the coalition’s initiative is to protect water resources and keep existing fossil fuel reserves in the ground to reduce greenhouse gas emissions. The initiative would not affect existing operations on Arroyo Grande Oil Field.

“A defining issue of our time is our changing climate,” San Luis Obispo Mayor Heidi Harmon said. “We need to do everything we can to keep whatever fossil fuels remain in the ground as we transition to a clean energy future.”

“The Carrizo Plain is this incredibly unique habitat that isn’t really found any place else anymore,” Anderson said. “Because of that, there are a number of endangered species that call the plains home.”

Carrizo Plain is one of five national monuments in California to be opened up to new drilling, mining and timber harvesting. A memo from the Bureau of Land Management in February 2018 announced plans to “simplify and streamline the leasing process” of resources on federally administered land. In response, Gov. Jerry Brown threatened to take legal action against the Trump administration in a letter addressed to Interior Secretary Ryan Zinke.

Other San Luis Obispo environmental groups have participated in a statewide grassroots resistance against Trump’s Offshore Drilling Plan, a proposal that opens the Pacific and every other U.S. ocean to oil and gas drilling. Considering the expense of offshore drilling, Varni said the real threat of fracking expansion is on land.

Campaigning for the citizens’ initiative will begin in June. Moving forward, Varni said the coalition’s focus is to encourage community education and foster local discussion around the future of oil drilling in San Luis Obispo.